Hiyaaaa future me who will no doubt be reading this in a year’s time as baby is nearing her first birthday. This week has been fun. Not – it’s been mainly sponsored by sneezing, snot and the constant toing and froing over whether to take paracetamol or not (I know there’s nothing wrong with taking it during pregnant but I try to hold it back for when I really really really need it).

Anyway, this week marks 25 weeks of being preggo. It’s weird I have times where I feel really small and like I could take on the world and then times (admittedly usually at the end of the day) when I feel like a whale and have to build momentum just to get off the sofa.

Weight Gain: Have definitely had another growth spurt and most definitely have a distinct waddle now when walking. Also craving white bread (specifically Warburton’s Toastie) and McVities Chocolate Biscuits. I’m blaming pregnancy but let’s face it, it could just be me.

Exercise: Decided to rearrange the kitchen and living room during one of Harley’s naps this week, which involved a lot of weight-lifting. Only after I’d done it did I realise it was probably a bit stupid of me.

Fruit of the week: This week it’s the Papaya, getting so close to that Watermelon – eek!

Sleep: Spoke way too soon. Sleep hasn’t been great this week thanks to an overactive mind, weird dreams, an icky cold and a toddler-shaped visitor into our bed a few nights. Also had cramp one night this week in my leg – ouch. 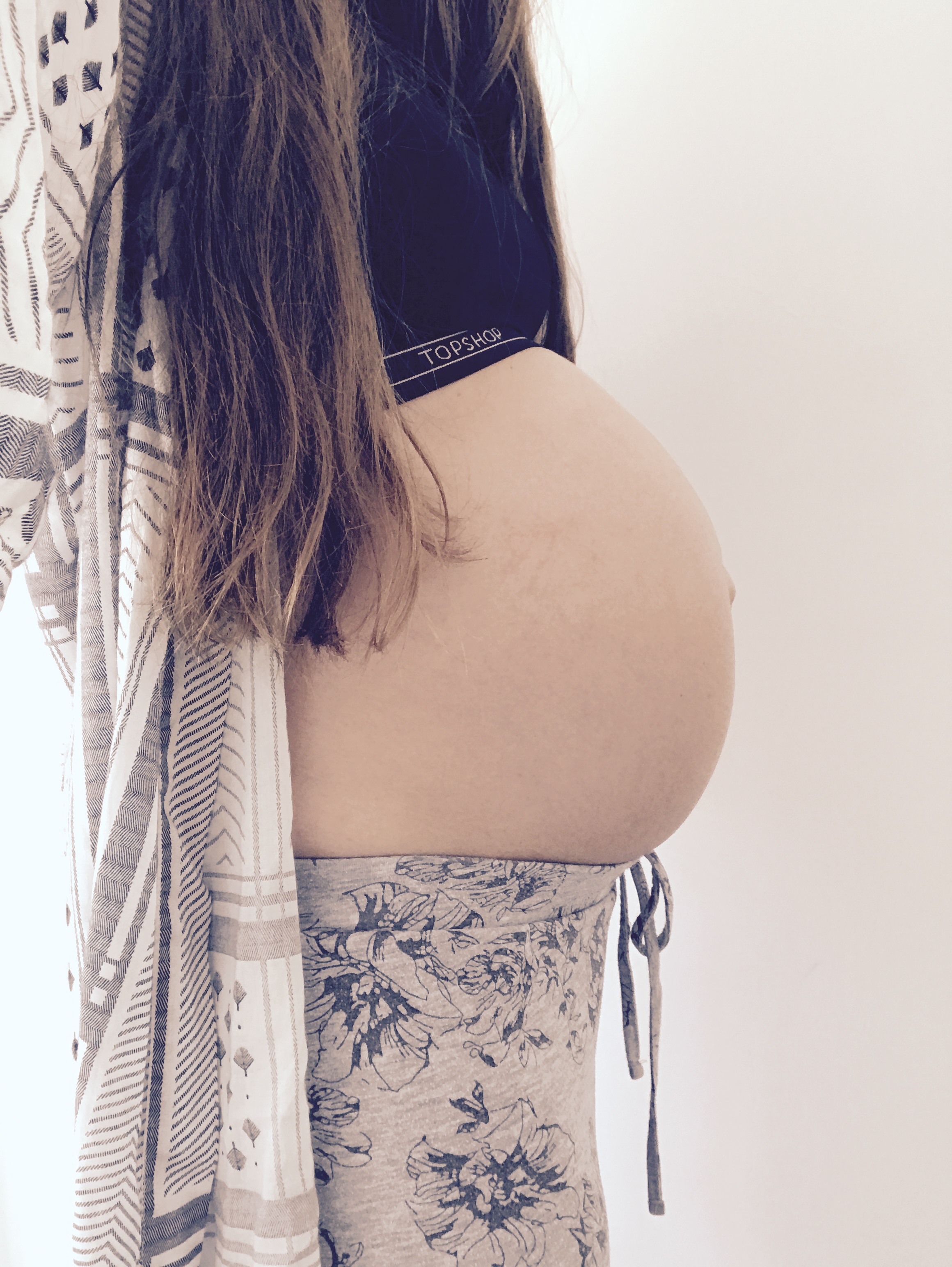 Irrational moments: Seriously so many to even write-down. I had a go at Tom this morning for ‘purposely’ loading the dishwasher wrong so he doesn’t have to do it again. I am very particular about the dishwasher and do have a system but don’t genuinely believe Tom is that calculated. The finale of Coach Trip: Road to Zante might have hit me hard too. *UPDATE* Just given into my white bread craving and ate three slices in 1 minute. Now feel disgusting.

Favourite moment of the week: Just generally how Harley is around the bump. If he hears me say that she’s moving or kicking he’ll instantly put his little hand on my belly and say hello. He will also tell anybody who listens that he has a baby in his tummy like mummy. His baby is called Woody apparently.

Milestones: Definitely feeling pokes like an elbow pushing against my belly or a rib getting in the way of her foot. Trying to convince Tom we should have a 4D scan, want to see her again!

Nursery progress: As my nesting instinct grows so does my need to start buying pretty things for her bedroom (and wardrobe). I’ve also developed a rather huge obsession with blush pink.

According to my pregnancy app, I’m in my third trimester next week. Errr where did the first two go?! Next week is also my birthday week (I’m allowed a whole week because that’s fair), which is basically great news because my make-up bag is running on empty and I need my fancy shampoo back in my life.

You can read all of my pregnancy updates here. When I say all, I mean from week 21 because I’d love to be that organised but I’m not.

This site uses Akismet to reduce spam. Learn how your comment data is processed.

Hey. I'm Emma, mum to Harley and Ada. I'll do anything for a hot cup of tea and a chocolate biscuit. This is a blog of our adventures, my ramblings and any tips I pick up along the way.